Singapore is an intriguing island… If you stop and think about it, it truly is one of a kind!

Of British colonial descent, it is now mainly populated by Chinese people living together with Malay and Indian people. From a simple fishermen’s port, Singapore has become a key financial hub and the world’s busiest harbour in terms of total shipping tonnage. And did you know that Singapore’s gain of independence from Malaysia was felt by all as a failure rather than a victory?

Here are a few key dates to help you better understand Singapore’s history:

13th century: A prince of the Malay empire founds the port of Temasek where Singapore now stands.

29th January 1819: Sir Stamford Raffles arrives in Temasek and establishes a trading post for the British East India Company. Raffles separates the city in different areas for each population and Singapore gradually becomes the centre of government of the Straits Settlements, a division of the British Empire. Singapore is a prosperous colony. 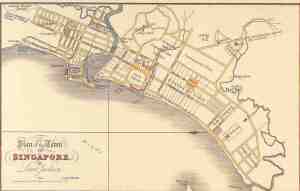 1939: World War II breaks out. On 15th February 1942, Britain’s “Jewel of the East” falls into the hands of Japanese invaders. Singapore is renamed “Syonan-to” (“light of the South”) and thus begins the Japanese occupation of Singapore.

1945: At the end of the war, the British return to Singapore but change the island’s status to a separate crown colony, allowing Singapore to hold its first elections.

1962-1965: In a referendum, Singaporeans vote for a merger with Malaysia. However, racial riots in Singapore makes the Malaysian Government very angry and on 7th August 1965, Singapore is declared independent. Lee Kwan Yew, Singapore’s Prime Minister, cries on television and seems to think Singapore’s fate is doomed… Racial and political tensions are very strong.

I really find Singapore’s history exciting and fascinating. If you have time to deepen your knowledge of Singapore’s origins, I would recommend you to visit the National Singapore Museum, or watch this Discovery Channel DVD recommended by a friend. Absolutely worth your time!!

This site uses Akismet to reduce spam. Learn how your comment data is processed.