I was there last time I was in Singapore and although some places are still there, I must say that shops there change quite quickly! Maybe because the rent is very high… Even so, it is also nice to see new shops and places to discover, it’s a good change in a place like Singapore where people complain it’s too small and always the same… 🙂

I discovered a new place that people had told me about, Bar stories. You have to look for it, it’s not very well indicated, and on the second floor too. 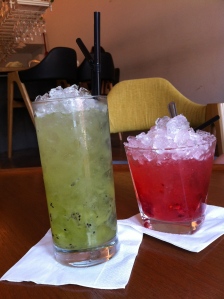 The originality of this place is that you can customise your own cocktails/mocktails. And if you have no idea what combination would be best, the bartender will help you out if you tell him your usual preference (sweet/sour/fruity/else…).

I really enjoyed my drink, and so did my friend with hers. I asked for something not too sweet and refreshing and I was given a cool lime-based mocktail with little bits of kiwi, while my friend had a sweeter and fruitier drink with strawberrys. Yummy.

The setting is also quite relaxing, with nice cafe-style touches. And prices are ok (although they must be higher at night for cocktails). So go for it 🙂 I recommend it !!

Singapore is known to be a very small, very developed country, surrounded by larger, less developed (and maybe envious?) countries. As a result, when Singapore became independent, PM Lee Kwan Yew thought it should be a priority to be able to defend the island, and thus decided to make National Service compulsory for all Singaporeans.

I thought that for some non-Singaporean readers here, an insight into the Singaporean military service could be interesting.

National Service (NS) is a mandatory 2 years of army training for all Singaporean men. The rationale behind it is that Singapore is too small to have a voluntary army, therefore all men would be needed if a war was to break out. One might add that Singapore may have learnt a lesson the hard way during WWII when the Japanese army invaded Singapore from the North on bicycles and Singaporean troops were unprepared, too busy watching the South end of the island…

To some Singaporean soldiers, NS (yet another Singaporean acronym!) is boring, constraining and a waste of their time. To others, NS can be very rewarding, and it can be the first position they have with actual responsibilities. The discrepancy between NS perceptions comes from the fact that missions can be extremely different from one another! 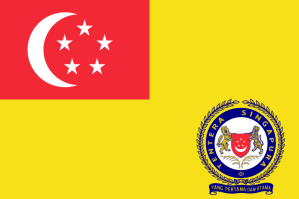 The army actually affects you to the department they think fit for you, after you go through a medical check. For instance a NS soldier can be affected to:

So if you spend your 2 years of NS in an office you basically have working hours and can go home on week-ends. However if you are deemed fit to go for officer training, you will have to go through weeks of survival trainings in Brunei jungles or learn about open-terrain tactics and combat on the field.

From my point of view (which is external, as I am only half Singaporean), I think I can understand that NS feels unbearable for some. However I still feel it brings people together. Feedback I have gathered from Singaporeans is that NS allowed them to meet people from different social backgrounds, and this has broadened their horizons and changed their mindset about certain things.

Plus, it has now become a rite of passage in the Singaporean society. All men have to go through this compulsory phase, and they all come back with a heightened sense of responsibility and belonging to a nation.

I must say I find this quite appreciable overall because not all citizens of the world today feel patriotic or responsible for the survival of their country !! If you wish to learn more about Singapore National Service, this documentary on youtube is quite good!